Trade for the Process Not the Money

Posted on April 26, 2020 by GreedyGoblinTrader 2 comments

The famous Stoic philosopher, Epictetus, rose from being born a slave in the Roman empire, to becoming the founder and an instructor of a philosophy school that became highly successful, sought after and admired. 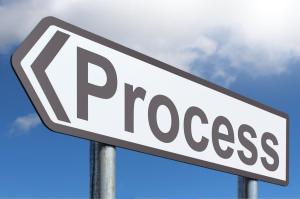 Over time, Romans traveled across the Adriatic Sea for education and training at his school.  Students typically stayed for about a year, usually no longer than 2 years.  Stoicism was very popular among the Romans at this time and wealthy Romans…and often their children would enroll in his school.

Epictetus must have become a bit frustrated with students training at his school, who learned what he taught, but focused on the wrong things.

This is apparent where he laments those who know the principles he teaches, are able to recite and provide examples in the classroom, but fail to act on what they know.  Again and again you see his comments about this.  Here is one of them:

For give me but one, who cares how he does anything, who does not regard the success of anything, but his own manner of acting. Who, when he is walking, regards his own action? Who, when he is deliberating, prizes the deliberation itself, and not the success that is to follow it?  Show me one who is truly noble and ingenuous, that I may see what I have long sought.

Someone who takes action, to move in the right direction because that action itself is right, not for the end result.

The right actions might not lead to the right result, but that isn’t the point.  That isn’t what is truly important.

This concept is essential to become a successful trader!

Ask yourself this: Why do you trade?

And yes, that would be the long term goal…and certainly a nice benefit of trading.

But you know what?

If money is your core focus when trading, you will likely not make any money.

More than likely than not, you will lose money, week after week, month after month until you stop…either a dwindled account that is a fraction of the size you started with or by blowing it up entirely to zero.  No account, no trading.  Sure you might have had some quick wins along the way, little or big blips of profit, but the overall trend will be down.

Trading successfully is one of the hardest tasks to accomplish.  I know it was for me.

There is so much to balance!

The technical aspects of trading: learning chart patterns, indicators, candlesticks patterns, trading platforms to learn, trading size, when to enter, when to exit, how long to hold, etc…

Then there is the desire to make money: to be a success, to manage our human emotions.  Here is where things can go off the rails for most of us.  The desire to make money on each trade, or to show a profit from week to week, month to month…that is the killer.  The desire to for our trading profits to buy something specifically that we want, or to fund our monthly expenses, to be able to quit our job and trade full-time.

When we trade with money at the top of mind, bad things can happen:

Money is what makes trading so difficult

There is so much emotion wrapped up in money.  But letting that emotion influence your trading decisions will lead to unhappiness, pain and failure.

As crazy at it sounds, we have to realize that we are trading with real money.  Of course you don’t want to lose it, you want for it to grow.  But in order for that to happen, you have to separate money out and away from your trading decisions.

When you bring money into your mind when making trading decisions, it distorts your decision-making.

I love two examples that I’d like to share with you…maybe you can relate to this (I know I can):

Jesse Livermore (one of the greatest traders ever) in the book, Reminiscences of a Stock Operator, describes traders hanging out in the brokerage house talking with each other about having the market pay for a $10,000 fur coat (this is in the early 20th century, so imagine how much that might have been in today’s dollars).  Sure enough, making trades specifically to make money to pay for the coat ended in losing money:

After that, one after another of the fellows tried to coax the market to pay for that coat. One day I said I would buy it to keep the office from going broke. But they all said that it wasn’t a sporting thing to do; that if I wanted the coat for myself I ought to let the market give it to me.

There isn’t a man in Wall Street who has not lost money trying to make the market pay for an automobile or a bracelet or a motor boat or a painting.

Jesse’s reasoning on why bringing money into the thought process when trading is a sure disaster?  He says it here:

What does a man do when he sets out to make the stock market pay for a sudden need? Why, he merely hopes. He gambles. He therefore runs much greater risks than he would if he were speculating intelligently, in accordance with opinions or beliefs logically arrived at after a dispassionate study of underlying conditions.

Mark Weinstien, a trader interviewed in the Market Wizards book by Jack Schwager, recounts the time he saw a castle in the south of France.  And he wanted it.  And he wanted for the market to pay for it:

I saw a castle in the south of France that I wanted. I was particularly impressed that the castle had a moat around it, and the idea of living there appealed to me. It was on the market for only $350,000, and I figured it would take about $50,000 a year to keep it up.  Today it is probably worth $5 million.  When I came back to the U.S., I wanted to make the money to pay for the castle almost immediately. That was a tremendous mistake.  Even though I had the money, I still looked at it in terms of how much it cost.

So here he is, with tons of money already…he could buy that castle without a problem, but he fixated on the idea of getting the market to pay for it.  He wanted to trade specifically to make money…to pay for this castle.

Here is what happened next:

On my next trade, I put on a large long position in soybeans. The market closed up the first day, and I had about a 25 percent profit on my money. I was planning to get out of the position at the end of the week. The biggest mistake I made was having a specific target of what I wanted out of the trade.

I didn’t consider the risk and took on too large a position.

I was not using any type of rational judgment. I was being guided by my material desires. The market went up again the next day, but collapsed suddenly late in the session, locking limit-down.

I couldn’t get out.

The next day I showed up at the brokerage office and the market opened offered limit down. I waited all day to see if it would come off of locked limit-down, but it didn’t. I was in a state of shock and had no decision-making capability left whatsoever. I couldn’t fall asleep, and found myself almost praying the market would somehow trade the next day. On the third day, I called the office about a half an hour before the opening, and they told me it didn’t look like there was any hope. I didn’t even bother going in because I couldn’t face the people in the office. I was devastated. I felt like I was wounded in a trench and watching myself bleed to death. The market went limit-down five days in a row, and I lost over $600,000. On the fifth day, I remember sitting in a park holding hands with a girl I had picked up, literally crying on her lap. I was practically in a psychotic state.

Instead of money, focus on the process of making trading decisions

Realize that you cannot control whether you make money or lose money on a trade.  That’s a fact.  Accept it.

This site uses Akismet to reduce spam. Learn how your comment data is processed.